Amsterdam plans to ban scooters from most cycle tracks. Currently, cycle tracks are still used by the so-called snorfiets category which has a speed limit of 25km/h - although most ride (much) faster. The measure will make cycle tracks safer for cyclists, and it will also result in cleaner air on cycle tracks.

The city has produced a map showing the new snorfiets regime. By my calculations, snorfietsen will have to use the road on a total of 180km (blue on the map) and they will be banned from another 71km of routes where there’s only a cycle track (marked in red). However, they’ll still be allowed to use about 93km of cycle tracks (green), at least for now.

To decide where to ban scooters from the cycle track, the city used data from the Fietstelweek, the large-scale initiative to collect smartphone location data from cyclists. This is interesting, since governments have complained that the number of participants in the Fietstelweek is declining (they started experimenting with Strava data instead).

I’ve created a map to show how the new snorfiets regime compares to Fietstelweek data. The width of the pink lines corresponds to the number of cyclists who used a route; the green dotted line shows where snorfietsen will still be allowed to use the cycle track. 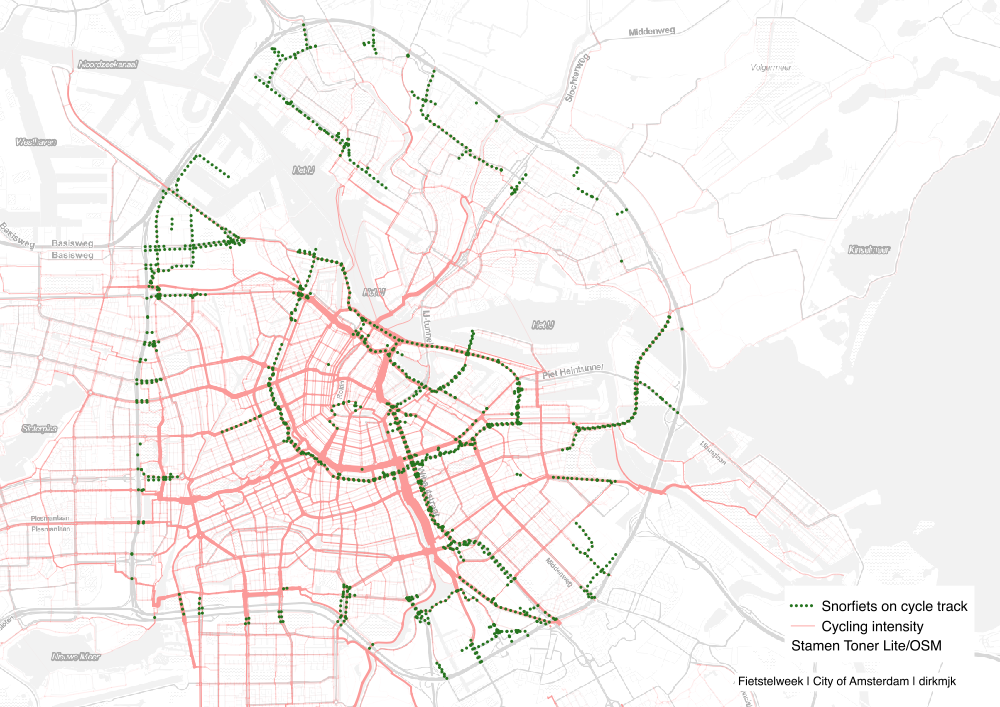 It appears that the city has done a decent job at avoiding the busiest cycling routes (in some cases, this is because these routes don’t have separate bicycle tracks to begin with).

That said, some problems remain. One example is the cycle track along the IJ north of Central Station, which can be very busy and where some snorfiets riders overtake other traffic in a dangerous way. And there’s the Amsterdamse Brug and Schellingwouder Brug (the bridges to the northeast of Amsterdam), where cycle tracks are too narrow for snorfietsen.

In the future, the city intends to ban scooters from all mandatory cycle tracks within the A10 Ring Road. Obviously, they want to do this without compromising the safety of snorfiets riders. This will be easier on routes where car speed is already low.

The map below shows the current average car speed on major roads. The green lines indicate where snorfiets riders will initially be allowed to continue using the cycle track.

Of course I don’t know what the situation is when you’re reading this, but likely some of the highest car speeds (on sections where snorfietsen will initially be allowed to use the cycle track) will be on the Gooiseweg, entering the city centre from the southeast, and the aforementioned Amsterdamsebrug and Schellingwouderbrug. On those bridges, many motorists exceed the speed limit. The city wants to change the road design to invite lower speeds before banning snorfietsen from the cycle track.

Elsewhere, it should be relatively easy to make the remaining cycle tracks scooter-free. Of course, a more practical solution would be to abolish the snorfiets category altogether.

If you wish to respond to the city’s plans, you can use this form. The deadline is 24 September.

UPDATE 6 April 2019 - The map showing car speeds doesn’t work anymore because the map of the city of Amsterdam where I got the data from is offline.

I used Qgis to create the first map and Leaflet for the second. I used GeoPandas and Shapely to calculate lengths. On the first map, the width of the pink may be slightly distorted due to varying distances between cycle routes in opposite directions.