Bike City Amsterdam, a new book by Fred Feddes and Marjolein de Lange, recounts how Amsterdam developed a cycling policy (more on the book below). An important source for the book is the archive of the Amsterdam branch of cyclists’ organisation Fietsersbond. In addition, traffic data was used to analyse trends.

The data represents manual counts on a single day, between 7am and 7pm, of traffic in both directions.

I was asked to think about a way to visualise this dataset, which posed an interesting challenge (and was a lot of fun to do). Below, I’ll discuss a few of the options we considered.

Given the geographical distribution of counting locations, it seemed to make sense to try a circular chart design. In fact, that idea had also occurred to the city’s infrastructure department. In a 2007 fact sheet, they used a radar chart (or cobweb chart) to visualise the Singelgracht bicycle counts. 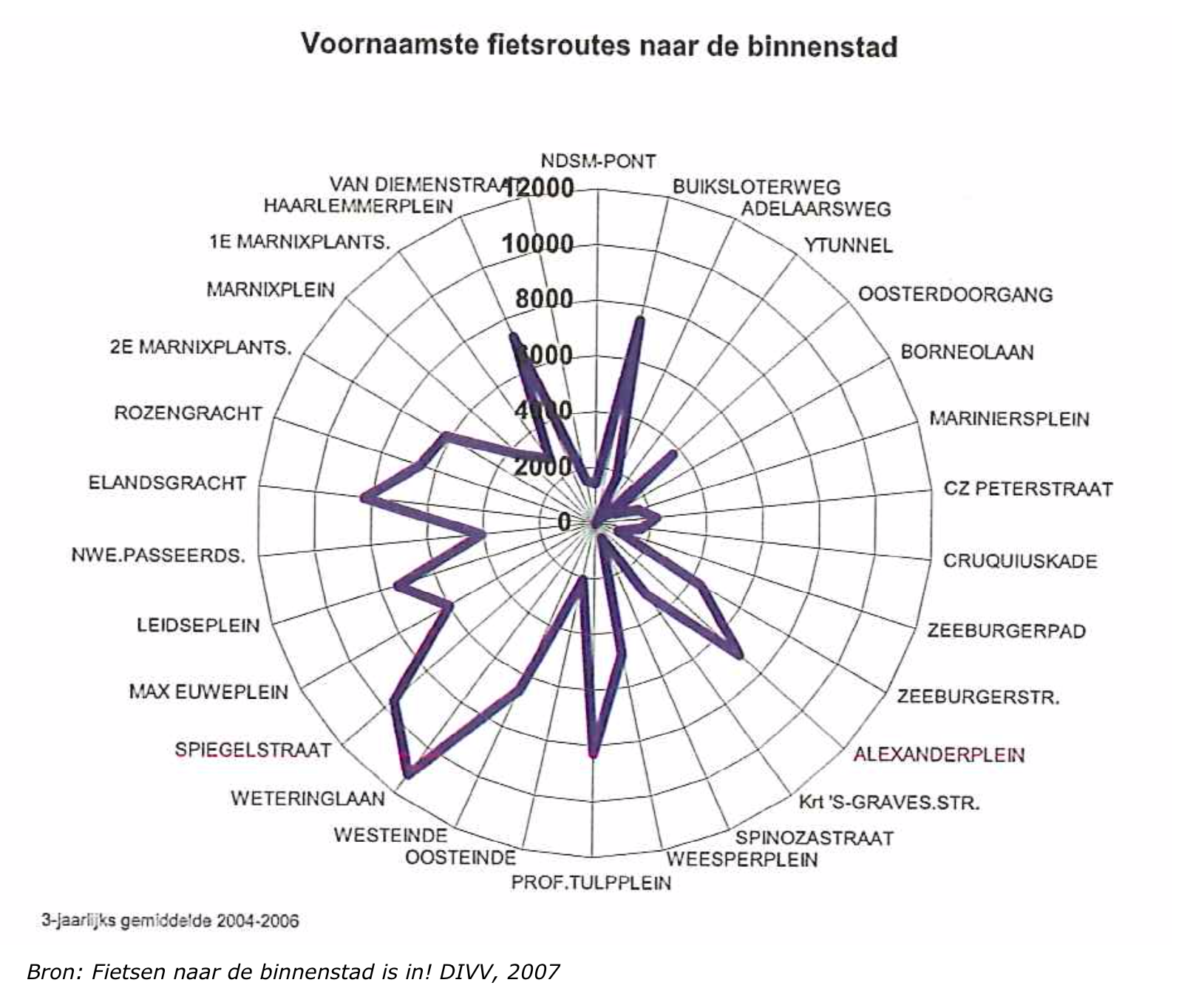 Incidentally, they didn’t use the term radar chart, but called it a fan (waaier). They used a bicycle metaphor to describe how it works: «from the middle, the counting locations around the city centre are connected like spokes in a bicycle wheel».

The chart looks really nice, but this chart type also has a drawback: there’s an implicit suggestion that the area within the purple line represents the number of crossings, which is in fact misleading (see this article for a discussion of a similar problem). Another limitation is that the chart doesn’t show how bicycle traffic changed - although it would be possible to make a version with separate lines representing 1980 and 2009.

As an alternative, I created what I’ll call a radial lollipop chart (to my knowledge, this chart type didn’t exist yet). The chart library that I use, D3.js, doesn’t seem to have a method to draw the ‘spokes’, or at least I couldn’t find it. Therefore, I wrote a function that calculates the start and end points of the lines. I had long forgotten how to use sine and cosine, so I had to look that up. I’ve published the code here.

Here’s a radial lollipop chart showing how cycling has increased at virtually all the Singelgracht crossings.

And here’s one showing the opposite effect for cars:

I love it when a chart has data points that break out of the chart area - although this is perhaps a bit extreme. The outliers are due to the fact that a large share of car traffic uses the Wibautstraat - IJtunnel route. I could have changed the scale to include those outliers, but then changes on other routes as well as changes in bicycle use would have become much more difficult to discern. 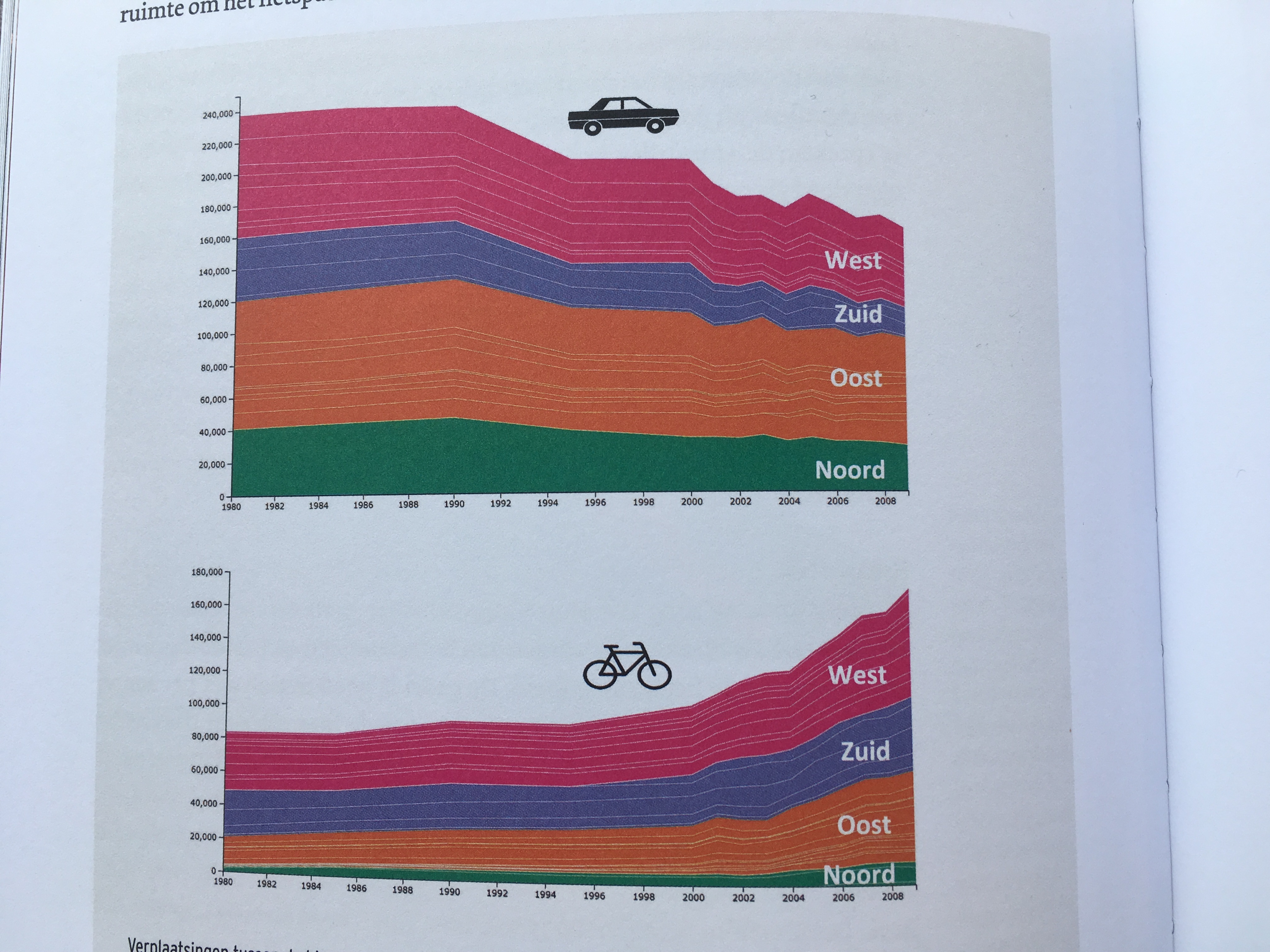 This is why the chart used in the book is an area chart, with colours corresponding to the broad geographical orientation of the crossings. Simple, but effective. And if you want to explore the details, click here for a draft version of the charts: bicycle, car.

About the book and exhibition

On 4 April, the Amsterdam branch of cyclists’ organisation Fietsersbond has handed over its archive to the Municipal Archive. Marjolein de Lange, who coordinated a volunteer project to prepare the archive, came up with the idea to use the material as input for a book - a project she carried out with author Fred Feddes.

This resulted in a very interesting book about activism versus cooperation; the place of cycling in urban planning; and how the magic power of Amsterdam’s cycling culture decided the epic fight for the right to cycle through the passage under the Rijksmuseum. The book, which contains a wealth of great photos; maps and posters, is a must-read for anyone interested in cycling, Amsterdam, or activist poster design. It’s been published both in Dutch and in English. There’s also an exhibition at the Municipal Archive (until 30 June, Vijzelstraat 32, access is free).