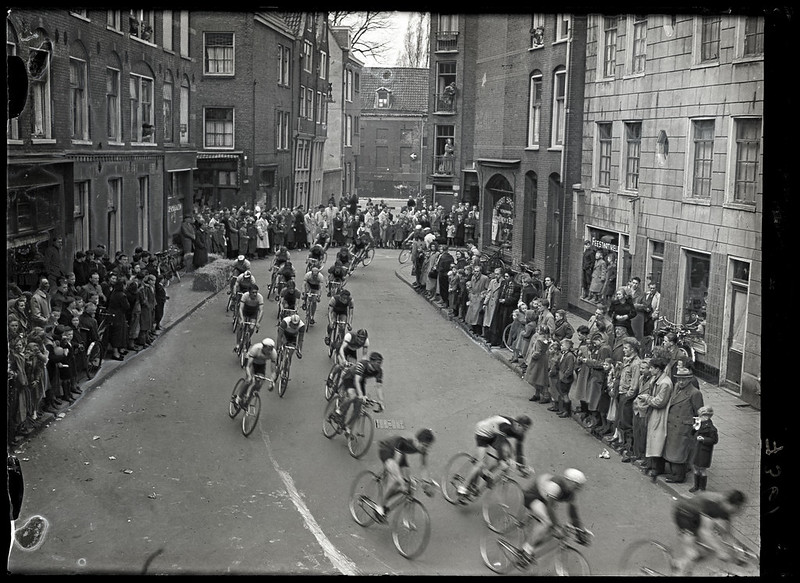 After a pause due to covid, criteriums are once again being organised in a number of Amsterdam neighbourhoods. These events are rooted in an old tradition: around 1950, dozens of neighbourhoods in Amsterdam had their own criterium or ‘wielerronde’.

The idea was simple. A course would be selected with a length of perhaps 1 or 2 kilometers, and riders would ride dozens of laps, to a total distance of 80 to 100 kilometers (beginners usually rode shorter distances). The events were organised by cycling clubs including Olympia, Le Champion (currently known for organising the Dam-tot-Damloop), Ulysses, De Germaan and De Gazelle.

Among the participants were renowned Dutch road cyclists, but also local boys who had learned to race on a regular bicycle with bended handlebars attached. Women didn’t particpate in these races - the Dutch cycling union wouldn’t give them a license, so they rode in Belgium.

The criteriums were very popular. Often tens of thousands of people turned out to watch, and local residents were involved in the organisation. In 1948, newspaper De Volkskrant wrote about the Ronde van de Eilanden: «The management of the Van Vollenhoven brewery spontaneously provided changing rooms for the participants and local residents contributed such a large number of prizes, that some even had to be turned down.»

The most popular event was perhaps the Canal Race, a race for butcher delivery boys on cargo bikes, from the Thorbeckeplein to the Jordaan. The boys took the corners so fanatically that some crashed into a canal. The 1949 edition made the Polygoon newsreel - as did the Ronde van de Markthallen in 1953.

Because of their popularity, the criteriums provided an attractive working ground for communist-leaning peace initiatives. At the Ronde van het Staatsliedenkwartier, signatures were collected for the Stockholm Appeal against nuclear weapons. Fifty-two riders, including the winner, signed the petition. This was reported by communist newspaper De Waarheid, which consistently covered the criteriums anyway.

People who came to watch the criteriums paid an entrance fee, and proceeds went to charity. This might be the fight against tuberculosis, or a social fund for elderly food distribution workers. Often, proceeds went to the local playground association, which would use the money for activities such as a Saint Nicolas party. In 1953, a special edition of the Ronde van de Eilanden was held to raise money for the victims of the North Sea Flood.

In 1955, charging entrance fees on the public road was suddenly banned. Subsequently, a ban on criteriums was announced, which went into force in 1956. This was probably a result of the growing dominance of cars. The street no longer belonged to the neighbourhood: from now on, motorists came first.

There have been sporadic attempts to re-introduce the neighbourhood criteriums. Le Champion tried to organise one in the Bijlmermeer in the 1970s, but they didn’t get permission to close a few blocks. In 2012, district politician Michèl Tromp argued for an annual criterium in Nieuw-West, but the district administration couldn’t find anyone who would organise it.

In 2017, local residents took the initiative to re-introduce the Ronde van de Orteliusstraat, and other neighbourhoods followed suit. Like their predecessors, today’s criteriums aren’t just sports events, but also neighbourhood festivals. The form has changed though: more races are held on a day, over shorter distances. The current criteriums have roots in the bike messenger culture, and races are often held on so-called fixies. Which reminds of the delivery boys of old, who rode their races on fixed-gear cargo bikes.

This article originally appeared in OEK, the magazine of the Amsterdam branch of cyclist organisation Fietsersbond. The main sources are the Delpher newspaper archive, and a series of books by Bertus Raats on road cycling in Amsterdam, Amsterdams wegwielrennen. Information on present-day criteriums can be found on rondesvanamsterdam.nl. If you’re wondering whether criteriums used to be held in the street where you live, check this map.