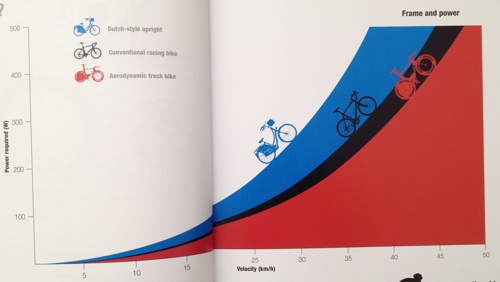 You might think the graph above is about the effort required for climbing, with those little bicycles going up the slope, but it’s not (in fact, it shows for each bicycle type how much more power is required to cycle as speed increases). Apparently, somebody added the bicycles for «fun», without giving much thought to what the graph is supposed to communicate.

The graph is from the book Cycling Science (not to be confused with the intriguing Bicycling Science), a book full of charts that explain how cycling works. Unfortunately, it contains quite a bit of chart junk and some of the graphs raise more questions than they answer.

For example, the chapter on cycling safety has a map that suggests the Netherlands is the most unsafe country for cycling. The problem is that it shows the percentage of road deaths who are cyclists, which says more about how many people cycle than about cycling safety. Another graph says Chris Boardman managed to cycle more than 56 km in an hour when he assumed a super-aerodynamic position, but that he would only manage 15 km when sitting upright. Really?