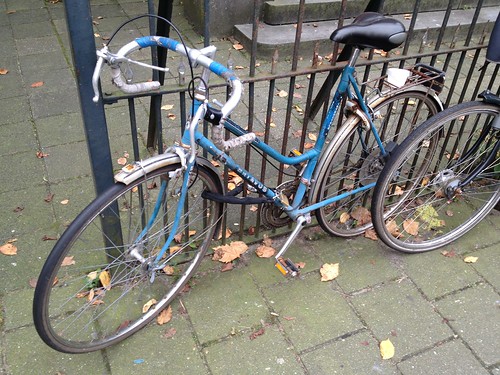 The ‘traditional’ Dutch bicycle originates in British and French predecessors, Zahid Sardar argues in his new book The Dutch Bike. Still, manufacturers cultivated the image of a typically Dutch, utilitarian product that has remained basically the same because it didn’t need improvement. As Timo de Rijk notes in the preface to the book:

Whereas foreigners found the Dutch bike heavy and unwieldy, here it was considered solid and indestructible, and in return the light-weight aluminium bicycles from France were openly maligned as inferior and needlessly equiped with ostentatious and fragile derailleur gears.

In the early 20th century, there were 4,000 bicycle brands in the Netherlands. Sardar refers to well-known manufacturers like Gazelle and Batavus as well as local brands in cities like Utrecht. He discusses the origin of the omafiets and its connection with women’s emancipation, as well as many other cultural and design aspects of the history of the Dutch bicycle.

In addition to the text, there is a wealth of historical photographs, advertisements, a collection of great head badges and other material. Then, at about two-thirds of the book, Sardar turns to modern Dutch bicicycle design, which is a bit of an anticlimax: most of these bicycles look rather silly. Take for example the Van Moof (no match for the elegant Joep) or the OV-fiets (the highly practical bicycle for rent at railway stations and other locations) - not to mention e-bikes and wooden bicycles.

Against this background, it’s good to see that the hippest bicycles in Amsterdam are currently old (girl’s) road bikes. With derailleurs.

For some reason iPhones appear to be unable to show photos from the road bike set and instead show random photos from my photostream.