How much delay for cyclists is caused by traffic lights 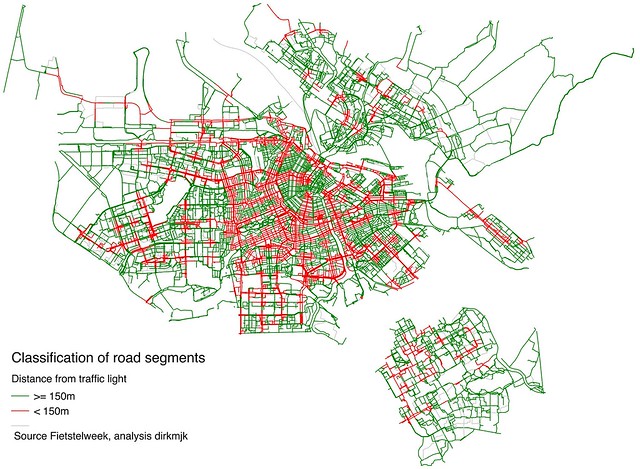 Here’s an attempt to answer the question, although I must say it’s a bit tricky. Again, I’m using data from the Fietstelweek (Bicycle Counting Week), during which over 40,000 cyclists shared their location data. This time I’m using the data about links (road segments). For each link, they provide the number of observations, average speed and relative speed.

With this data, it should be possible to estimate what share of total delays occurs near traffic lights. But what is near? It’s to be expected that the effect of traffic lights is observable at some distance: people slow down while approaching a traffic light and it takes a while to pick up speed again after. But what threshold should you use to decide which segments are near a traffic light?

Judging by the chart, it appears that the effect of traffic lights is diminishing beyond, let’s say, 150m. You could use this as a threshold and then calculate that delays near traffic lights constitute nearly 60% of all delays.

However, there’s a problem. Even if a delay occurs within 150m of a traffic light, the traffic light will not always be the cause of that delay. I tried to deal with this by estimating a net delay, which takes into account how much delay normally occurs when cyclists are not near a traffic light (in fact, I used two methods, that have quite similar outcomes). Using this method, it would appear that over 20% of delays are caused by traffic lights.

Now, I wouldn’t want to make any bold claims based on this: these are estimates based on assumptions and simplifications (in fact, if you think there’s a better way to do this I’d be interested). That said, I think it’s fair to say that average bicycle speeds appear to be considerably lower near traffic lights and that it’s plausible that this may be the cause of a substantial share of delays for cyclists.

UPDATE - I realise that the way I wrote this down sort of implies that you could reduce delay for cyclists by perhaps 20% just by removing traffic lights, but that would of course be a simplification.

I used Qgis to process the Fietstelweek data. I used the clip tool to select only road segments in Amsterdam. I had Qgis calculate the distance of each segment and extract the nodes, which I needed to get the coordinates of the start and end points. Further processing was done with Python.

The dataset contains a relative speed variable (it is capped at 1, which means that it only reflects people cycling slower than normal, not faster). A relative speed of 0.8 would mean that people cycle at 80% of their normal speed. I calculated total delay at segments this way:

You can then calculate delay at segments near traffic lights, as a percentage of the sum of all delays.