It may be difficult to explore the maps on a mobile screen. 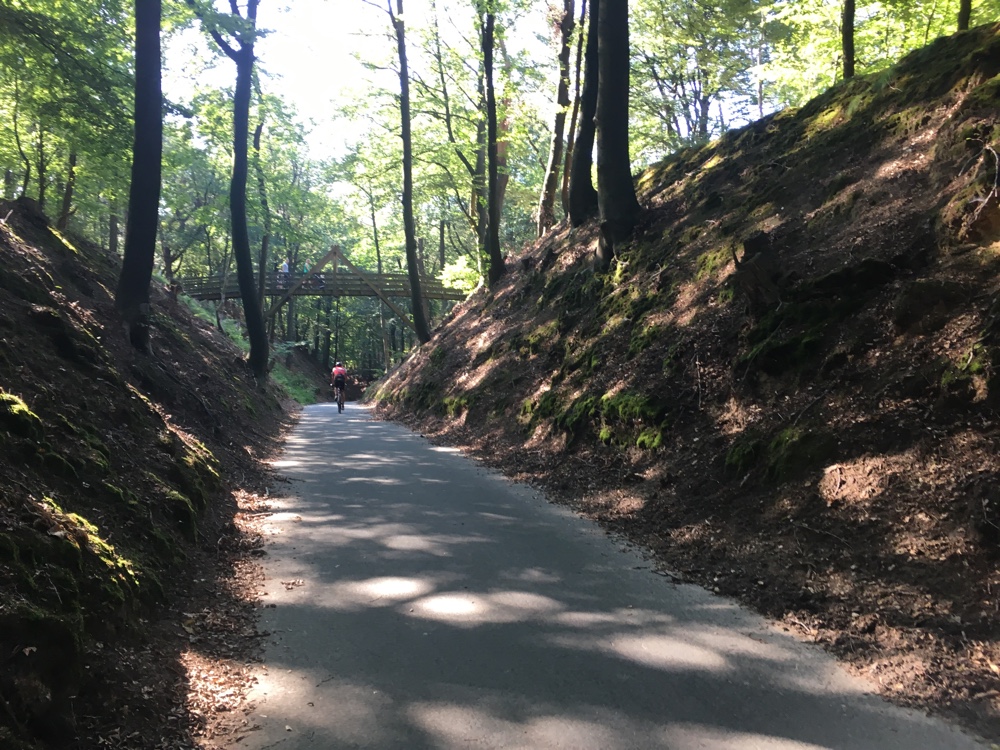 Holleweg in Rheden, seen from above. Notice how meticulously the cycle paths are cleaned in the Veluwezoom area

If you’re cycling in the Netherlands, especially in hilly areas, you may well find yourself on a road named Holleweg (Holloway). According to Wikipedia, the name refers to a road or track that is significantly lower than the land on either side, not formed by the (recent) engineering of a road cutting but possibly of much greater age.

A nice example is the Holleweg in Rheden, shown above. Then there’s the Oude Holleweg in Berg en Dal near Nijmegen, a short but tough climb. And a route down the Amerongenseberg will also take you along a Holleweg, but this one isn’t actually a holloway (anymore?). The Dutch national archive contains two photos of roads named Holleweg, both being used by cyclists.

I had the idea that if you’d create a map of all the roads named Holleweg, you might end up with a simplified elevation map of the Netherlands. However, things turned out to be a bit more complicated. Wageningen University & Research (WUR) have created a geomorphological map of the Netherlands (data, description). This map considers holloways a subcategory of dalvormige laagten (valley-shaped hollows), which suggests pretty much the opposite of elevation.

Below is a map showing roads named Holleweg (derived from Open Street Map), in red, and areas classified as holloway by WUR, in blue.

The roads classified by WUR as holloways are concentrated in a number of areas, most notably Zuid-Limburg. There is very little overlap with roads that are named Holleweg. I suspect this is because the WUR definition refers to a specific type of holloway only.

Update 13 September 2019 - WUR explains: «The development of the geomorphological map spans a long period, and over time, many different people have worked on it. The holloway phenomenon has not been systematically mapped and has been charted mainly where it ‘competes’ with natural valley forms, for example in Zuid Limburg and Rijk van Nijmegen, as you suggest. In most cases, old cart tracks and hessenwegen cutting through sand ridges have not been identified as holloways, unfortunately. […] As we’re updating the map, we try to interpret those roads as holloways as well.

So how does the WUR classify the roads named Holleweg? Where possible, I’ve linked the street segments named Holleweg to a land form group on the WUR map. The result is shown below (I stick to the Dutch descriptions because I’m not sure of the correct English translations of the terms). The last column shows the total surface area of each land form group, as a percentage of the total area mapped by the WUR.

Over half the area covered by the WUR map is classified as vlakte (plain). On the other hand, street segments named Holleweg are predominantly in land form groups that suggest relief, like heuvels (hills) and heuvelruggen (ridges).

In addition to land form groups, WUR identifies subgroups. For example, of the 58 street segments in the first table row, 40 are in the subgroup stuwwal (hills created by a glacier pushing up soft material). If I’m not mistaken, the examples in Rheden, Berg en Dal and Amerongen cited above are all on a stuwwal. 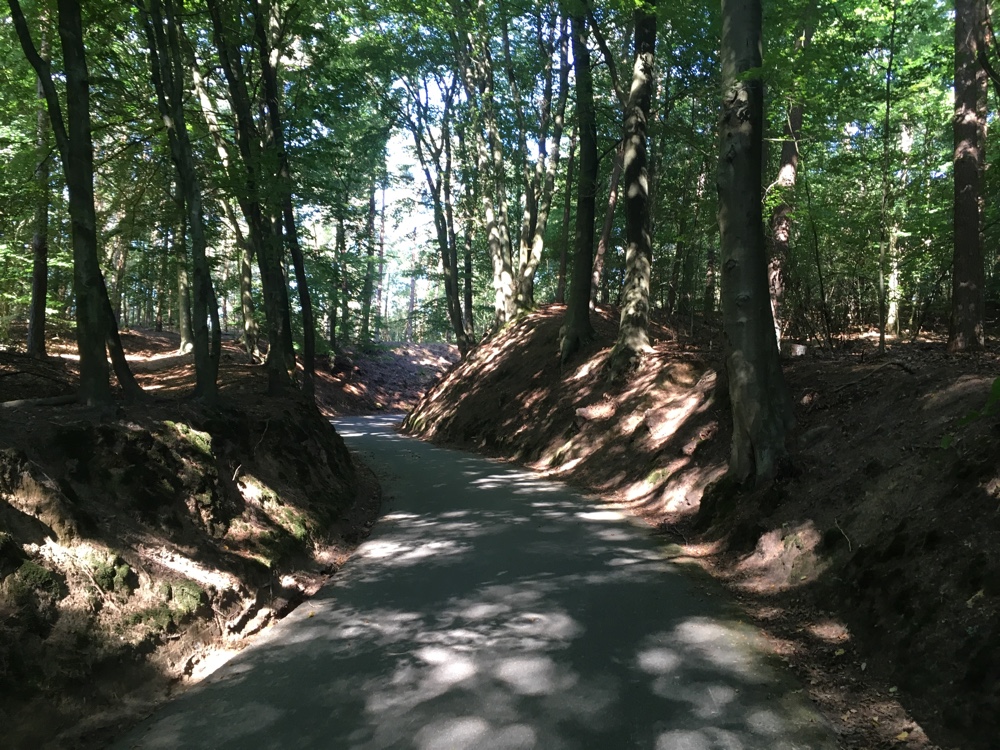 The Holleweg in Rheden again, about halfway up.

I thought it might be interesting to extend my analysis to foreign-language equivalents of Holleweg. This wasn’t easy. For example, Google Translate fails to offer reliable translations of holloway, which suggests the term isn’t used often enough to train the translation machine.

But I came across this tweet about Corredoira, the Galician translation of the book Holloway, by Robert Macfarlane, Stanley Donwood and Dan Richards. In the endless responses to the tweet, various other translations of the term are offered. Some of these served as clues to find yet other translations.

I used the Google Elevation Api to look up elevation for the start and end points of all segments. As all data in this article, this comes with some caveats, discussed in the Method section below.

Based on the highest value for the start and end points, the median elevation of all segments is a little over 154m, with three-quarters below 290m and the highest at 2.149m. This suggests that streets named holloway may be found in hilly areas, but not very often in high mountains. As one would expect, median elevation varies across countries: for example, 22m in the Netherlands; 44 in Belgium; 63 in the UK; 136 in France; 152 in the US; 254 in Germany and 357 in Austria.

The median gradient of all segments is about 2% and three-quarters are below 5.3%.

Below is a map showing the segments, with different colours for the language versions.

Unsurprisingly, language doesn’t always reflect (current) boundaries. There are streets named Holleweg in Germany, for example near Solingen. And in France, near the German border, there are a couple of streets named Rue Hohlweg.

One thing is clear: the Holleweg map isn’t a simplified elevation map. While the name may be used for roads in hilly areas, it appears to be rare in mountainous areas such as the Pyrenees or the Alps.

The same applies to Northern America: there are few Holloways in the Rocky Mountains.

And in Australia, Holloways seem to be located mainly on the margins of the Great Dividing Range.

Of course, all kinds of factors may influence the prevalence roads named Holloway. At a very basic level, you wouldn’t expect too many of them in areas with low population density. I imagine cultural factors could play a role as well. But geology also seems relevant. In their book Holloway, MacFarlane a.o. observe:

Holloways do not exist on the unyielding rock regions of the archipelago, where the paths stay high, riding the hard surface of the land. But where the stone is soft - malmstone, greensand, sandstone, chalk - there are many to be found, some more ravines than roads.

That makes sense. Perhaps the prevalence of streets named Holloway isn’t determined as much by height as by characteristics of the soil.

Oude Holleweg in Berg en Dal, view from above. As the road is steep and narrow, downhill traffic is not allowed (in fact they should ban cars altogether).

I’ll conclude with some other characteristics of the segments from OSM. According to Wikipedia, holloways are typically too narrow to allow vehicles to pass each other. Some of the OSM segments have a tag indicating whether it’s a one-way street, but there are too few of them to draw any conclusions. Seven hundred segments have a maximum speed tag; the median value is 32 km per hour.

I used Python to download OSM data (using the Overpass API), to retrieve elevation data from the Google Elevation API, and for processing the data.