The map makers of the City of Amsterdam have created a map that shows the Neighbourhood Street Quota or BSQ. The BSQ plays a key role in a highly controversial reform that is eroding the city’s social ground lease policy, but that’s not the topic of this article. For now, I’m interested in the BSQ as an indicator of land value.

More interesting is how the BSQ has changed. The city government has provided data for thousands of streets or street segments, for 2014 and 2016. Of course, this is a short time period and the patterns may or may not reflect longer-term developments.

The chart below shows the distribution of BSQs for flats (as opposed to single-family dwellings) for 2014 and 2016.

The peak has moved to the right, as the median value has risen from 28 to 38. For political reasons, the BSQ can never be lower than 5 or higher than 49, which explains the large number of streets with a value of 5 or 49. This implies that rises in BSQ don’t fully reflect how much land values have risen.

The map below shows how much BSQs for flats have risen in different parts of Amsterdam. I omitted streets with low or high BSQs where substantial changes in BSQ may have been hidden by the upper and lower limits. At the high end, this applies to the Canal Belt and much of the Zuid District. At the lower end, this applies to many peripheral areas including almost the entire Zuidoost District. 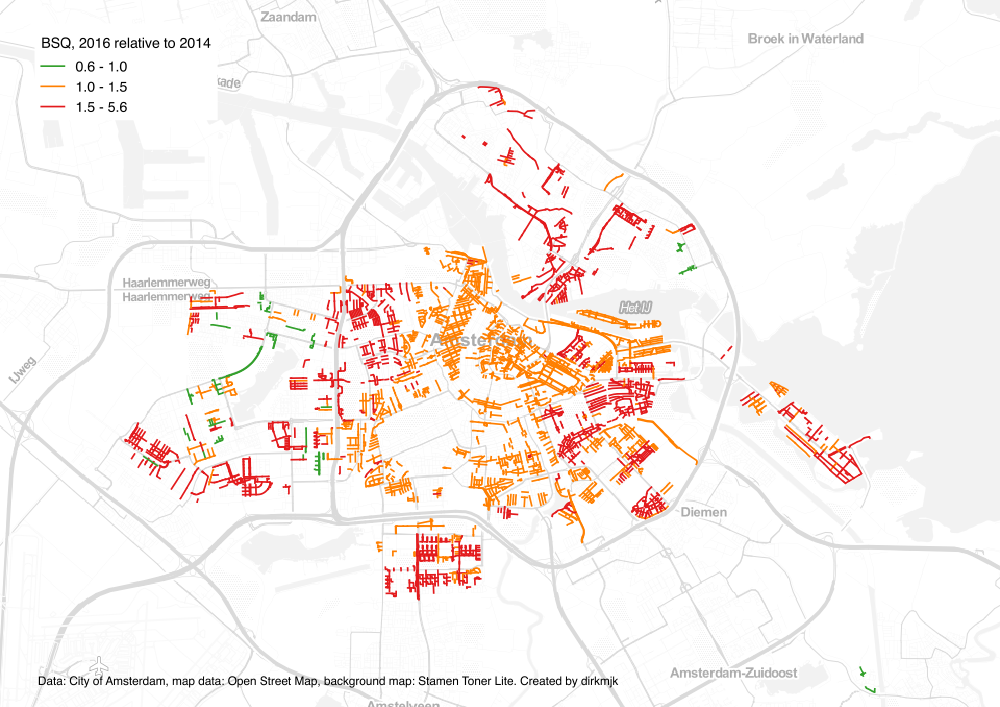 Red streets indicate an increase of the BSQ by more than a half; orange streets an increase by less than a half and the rare green streets a decrease of the BSQ. There are some red areas outside the ring road: mainly the IJburg expansion to the east; some parts of Nieuw-West; and Buitenveldert. Buitenveldert is a neighbourhood south of the Zuidas business district with a growing number expats and students among its residents.

Within the ring road, BSQs are rising in areas that are often associated with gentrification, such as the Kolenkit in West, the Vogelbuurt in Noord and the Indische Buurt in Oost. Perhaps more surprising is Betondorp, a low-income area with many older residents, described in 2015 as «one of the few neighbourhoods in Amsterdam not yet affected by the advance of gentrification». If the BSQ is an indication, that may be about to change.

For each house, the municipality calculates an individual land quota using the formula: land value / (land value + theoretical cost of rebuilding the house). The land value is obtained by subtracting the rebuilding cost from the total value of the house (WOZ).

Subsequently, BSQs are calculated as the average land quota per street (or street segment if a street traverses multiple neighbourhoods). This is done separately for single-family dwellings and flats.

The interpretation of the BSQ is a bit tricky: one should expect higher land values to be reflected in higher BSQs, but the exact relationship will depend on the value of the building and whether that also responds to changes in land value (for example, because more expensive materials are used).

In my analysis, I only used BSQs for flats, and only the streets or street segments for which a BSQ is available for both 2014 and 2016 (thus excluding new urban expansions).

In creating the map I also ignored long streets that traverse multiple neighbourhoods and that therefore have been separated into multiple segments. Constructing street segments from line geometries representing the entire street seemed like a lot of work (perhaps there’s a simple way to do this, but I couldn’t find it).

I used Tabula to extract data from the original pdf; this Python script to process the data, create a csv for the chart and create a shapefile for the map; D3.js for the chart and Qgis to create the map (using Open Street Map map data and Stamen Toner Lite for the background).