The orientation of Amsterdam’s streets

Eight days from now, Amsterdam will have a new metro line traversing the city from north to south. But what about the orientation of the city’s streets?

Geoff Boeing - who created a Python package for analysing street networks using data from OpenStreetMap - just published a series of polar histograms of American and ‘world’ cities. Amsterdam isn’t among them, but Boeing made his code available, so I used that to create charts for the largest cities in the Netherlands. 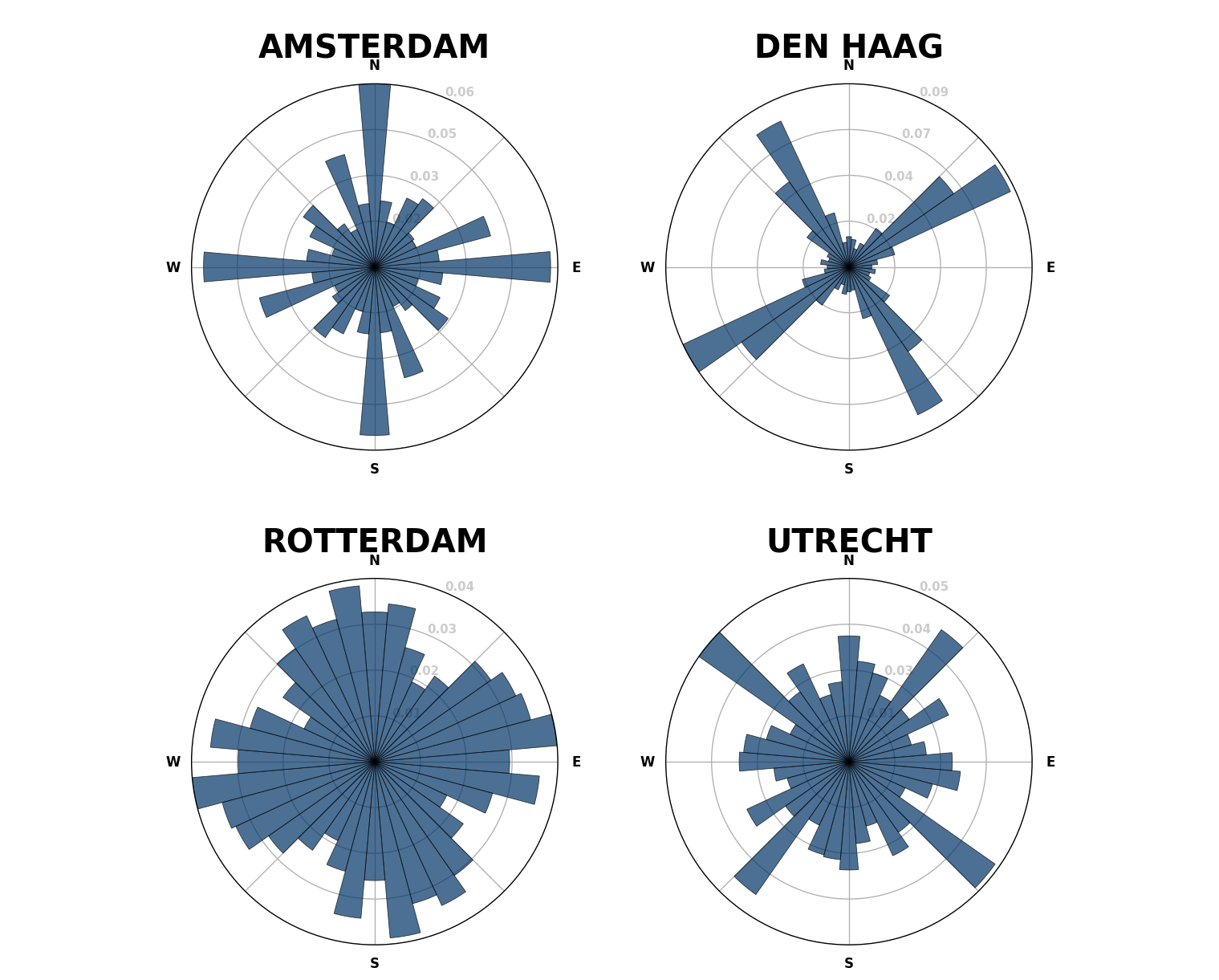 While the pattern isn’t nearly as monotonous as in most American cities, I’m still surprised how many streets in Amsterdam run from north to south or from east to west. The Hague has a strong diagonal orientation; Rotterdam doesn’t seem to have a dominant orientation and Utrecht is a bit in between.

With Boeing’s code, you can also do the analysis specifically for roads that are accessible to cyclists, but for Amsterdam that doesn’t make much difference since most roads are.

15 July 2018 - There was some really interesting discussion on Twitter in response to my post from last Friday (I use Twitter names to refer to people; most sources are in Dutch).

Both Sanne and Egon Willighagen asked how the chart treats curved streets. I have to admit I hadn’t checked, but the docstring of the add_ege_bearings function explains that it calculates the compass bearing of edges from origin node to destination node, so that implies that streets are treated as if they were straight lines.

Is that a problem? Probably not for many US cities, for they seem to have few curved streets. As for Amsterdam: most people’s mental image of the city is probably dominated by the curved canals of the city centre. However, many neighbourhoods consist of grids of more or less straight streets. So perhaps curved streets have little impact on the analysis after all.

Hans Wisbrun argues that the chart type is nice, but also deceptive. The number of streets is represented by the length of the wedges, but one may intuitively look at the surface, which increases with the square of the length. In a post from 2013 (based on a tip from Ionica Smeets), he used a chart by Florence Nightingale to discuss the problem.

Rogier Brussee agrees, but argues that a polar chart is still the right choice here, because what you want to show is the angle of streets.

In a more general sense, I think the charts are an exploratory tool that’ll give you an idea how street patterns differ between cities. If you really want to understand what the wedges represent, you’ll have to look at a map.

I don’t know much about geography (or about The Hague for that matter), but a bit of googling suggests Jacobs is right. See for example this map (from this detailed analysis of one of The Hague’s streets), with the old sand dunes shown in dark yellow.