Who use the Dafne Schippers bicycle bridge

If all goes well, the Dafne Schippers bicycle bridge in Utrecht should reopen on Monday, after a short closure for maintenance. I have a special affinity with this bridge: it opened on the day I started working in Leidsche Rijn, west of the Amsterdam-Rhine Canal, and it’s part of my favourite cycle route to work.

Who else use this bridge? With the usual caveats, data of the Fietstelweek can provide some insights. The charts below show, for each direction of traffic, at what time cyclists use the bridges across the canal.

The map below shows the routes of cyclists using the bridges. From top to bottom: Hogeweidebrug (or Yellow Bridge), Dafne Schippers bridge and De Meern bridge. 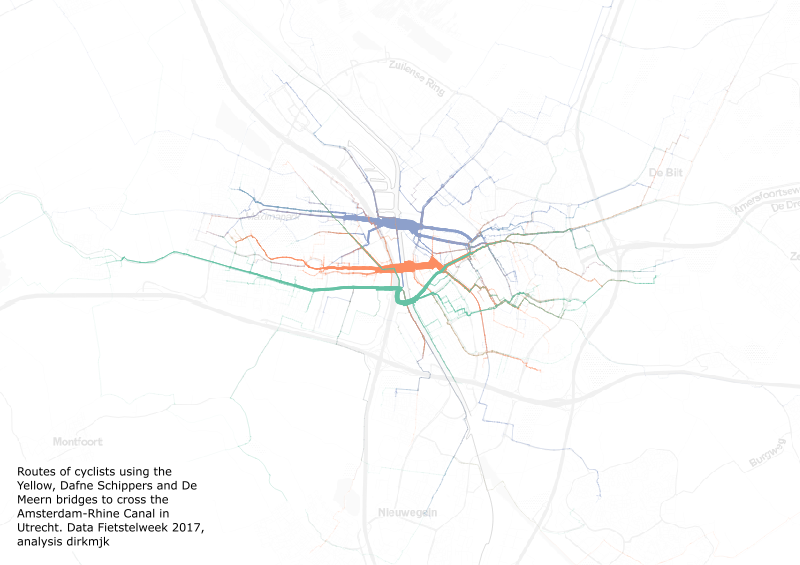 It appears that many cyclists use the bridges to go to the area around Central Station. Users of the De Meern and Dafne Schippers bridges tend to use nice routes that converge along the Leidseweg. Users of the Yellow Bridge use the not-so-nice route along Vleutenseweg, or the slightly better route along the railway track.

Research has shown that cyclists don’t always prefer the shortest route to their destination; the quality of the cycle tracks also plays a role.

Yet the map suggests that many cyclists opt for the shortest route, even if a nicer alternative is available. For example, few cyclists from the northern part of Leidsche Rijn seem to use the Dafne Schippersbrug, or the route along Keulsekade (the latter avoids long waits at traffic lights).

See also this analysis by DUIC, which shows that the bridge is not only popular among cyclists, but also among runners, which is fitting given the name of the bridge.